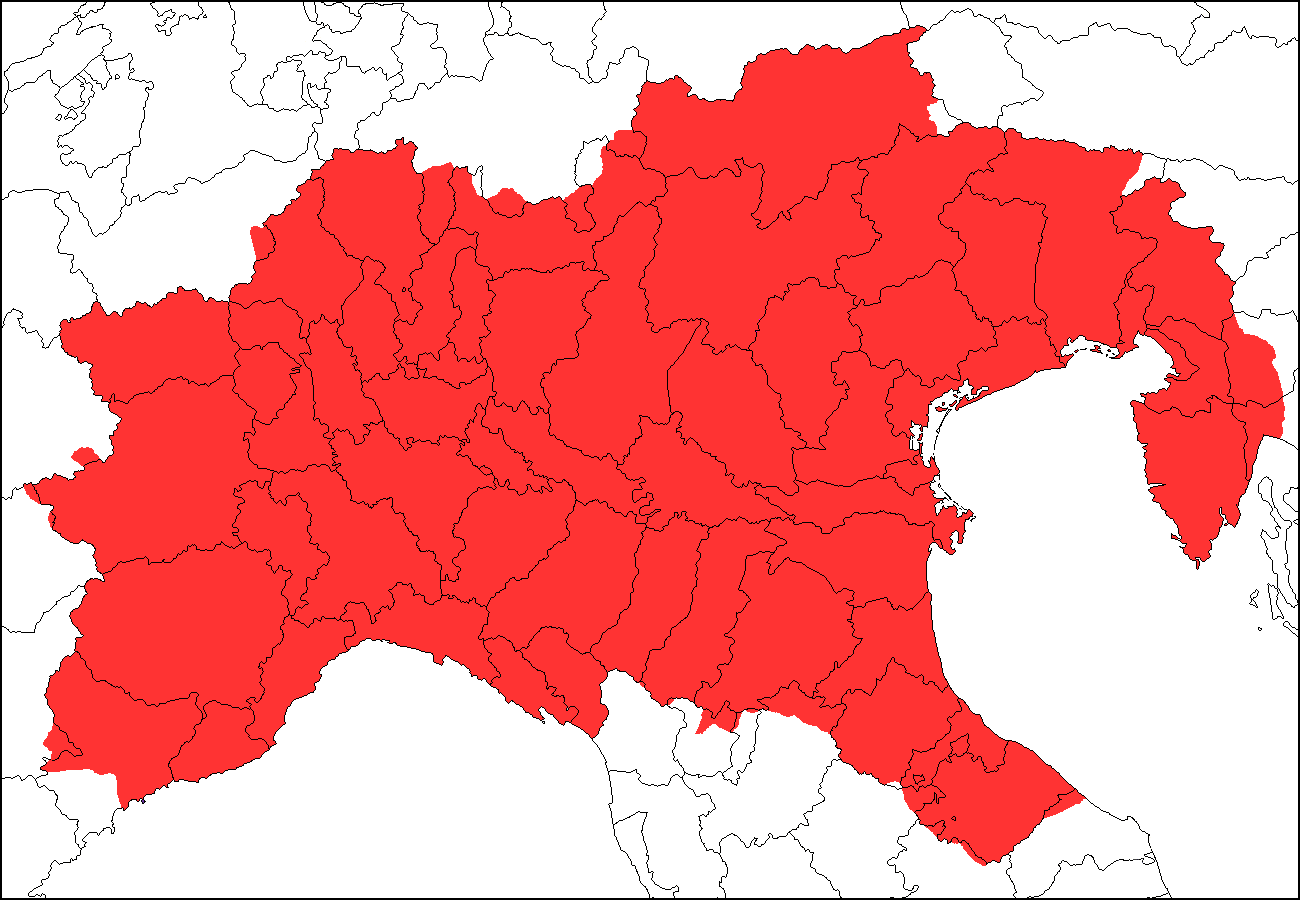 The concept of the Great Lombardy that our movement spreads, covers essentially the entire Northern Italy, that have a specific appearance which sets it apart from the rest of the Italian territories.

Northern Italy is an European region characterized by a sub-continental (not Peninsular) geography, a sub-Mediterranean tempered climate (except the area of Liguria), a alpine and padanian conformation that put it between the Mediterranean and Central Europe; ethnically the Northern Italians are part of the indoeuropean Italic-Celtic family with Mediterranean and Germanic influences; linguistically they belong to the Western branch of Romance languages, unlike to the rest of Italy which is Eastern Romance; culturally they enroll in that ring of conjunction between Southern and Central Europe on which was built our own history, between the Roman and Celtic-Germanness.

All this is closely related to the biological sphere (in the anthropological and genetic sense) of the commonly called “Padanians”, who physically often present a Central European appearance (which does not necessarily mean German) and genetically they distance themselves from Central and Southern Italy thanks to its bigger Mesolithic, Indo-European and Nordic legacy. And this is said without any racist grain.

There are some marginal areas that might appear forced call (Great)Lombard, but they are an integral part of Alpine-Padanian, Italic-Celtic continuum ( this is mean Proto-Celtic/ Celtic-Ligurian, Venetic, Italic, Gallic) and Gallic-Romance Cisalpine and so they can’t be excluded from the group; I mean Liguria, Romagna, Venetic lagoons, Venezia Giulia, areas slightly affected by the Lombard domination.

There are also areas like the Aosta Valley, the Southern Tirol, the Isonzo Valley and Istria that are resting out from a genuine Lombard territories because they are inhabitated by foreign minorities; but these regions belong to the Italian geographical space( Northern Italian) and storically before the coming of these minorities, the population was cisalpine and romanized.

The borders of that Great Lombard areal which could be divided into a Western and an Eastern branch, are the Alps in the North, the Alps and the river Var in the West, the Toscan-Emilian Appennine (corroborated by the linguistic border Massa-Senigallia), the river Misa in the South, the Alps, the creek Eneo and the Kvarner in the east.

Besides the ethnic Lombardy these territories belong to the Great Lombardy: the region of Nizza, Liguria/Genoese, Lunigiana, Eastern Emilia, Romagna, Ager Gallicus, Veneto, Trentin, South Tirol, Friul, historic Venezia Giulia( the current with the area of Gorizia, the coast of the Carso, a part of Carniola’s inland, Istria, Fiume). 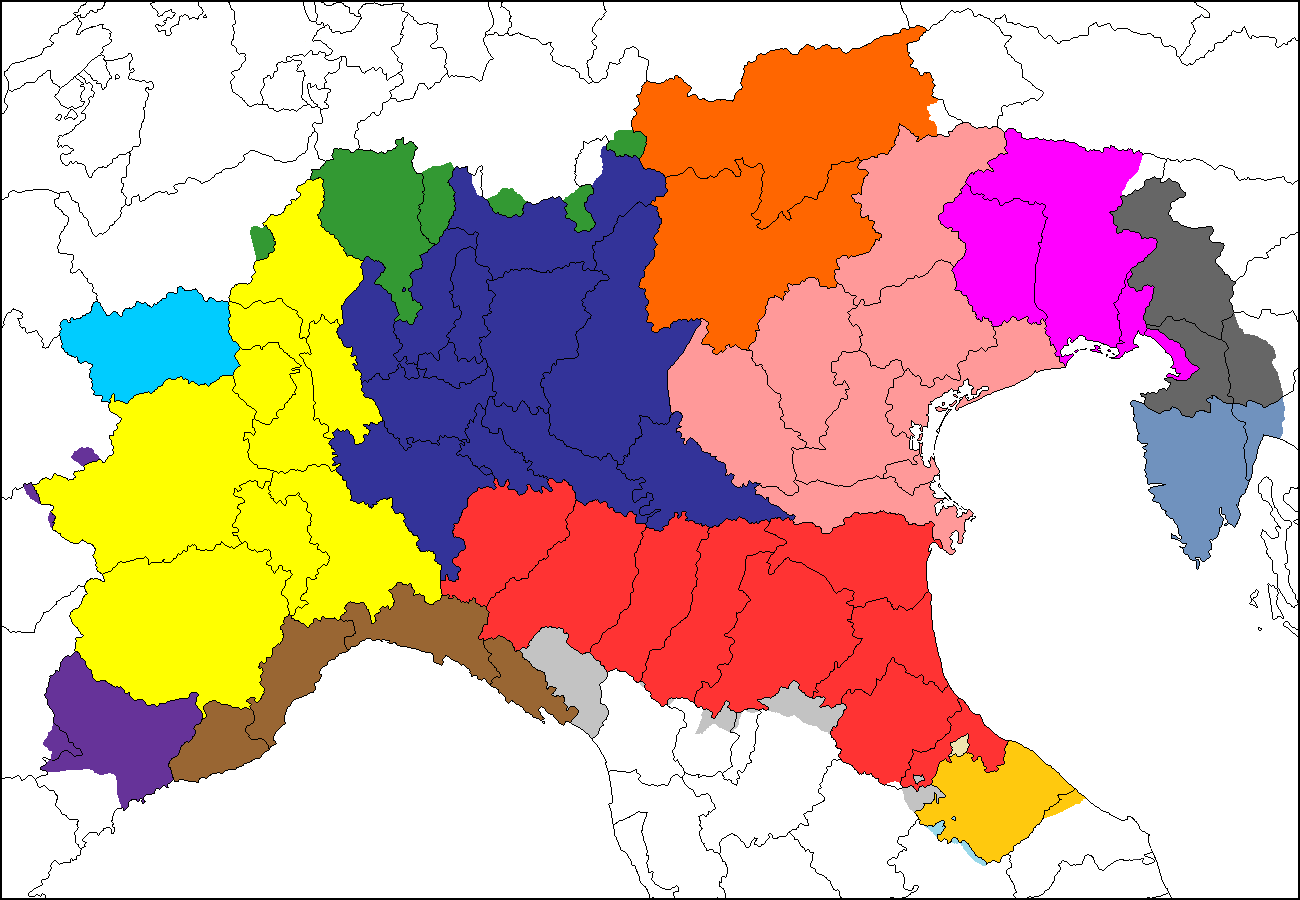 An interesting cultural fact is represented by the considerable presence of the medieval Lombard crosses in the territory, namely the St. George cross (guelf) and St. John Baptist  cross (ghibelline) employed as a comunal emblems; the primary is the first, symbol of Milan, of the Lombard League, symbol of Genoa and of its ancient repubblic too, but the second is also noteworthy, military emblem of the Holy Roman Empire that encompassed the medieval Kingdom of Italy ( the North-Centre of Italy) as well as symbol of its capital Pavia that was also the capital of Lombard Kingdom. In order to mention the most important Great Lombard centres that have these symbols we want to remind: Milan, Bologna, Genoa, Imperia, Ivrea, Alba, Novi, cqui, Alessandria, Vercelli, Varese, Lecco, Mantova, Reggio, Padova, Rimini (St. George cross); Pavia, Susa, Aosta, Mondoví, Cuneo, Asti, Novara, Lugano, Domodossola, Como, Bormio, Borgo San Donnino, Vicenza, Treviso, Castelfranco, Ceneda, Forlí (St. John Baptist cross).

The theme of the shield with the cross, beyond color, it is still widespread in the Po Valley. But is also important the white-red chromatism that is tipically alpine-padanian in contraposition to the Mediterranean yellow-red, of Roman origin. The Bissa (the snake) is instead is a true emblem of the Ethnic Lombardy, the most original symbol of the Lombard People.

The focus of our movimentistic action is, of course, the Ethnic Lombardy but as you can understand from our own name we want to extend the propaganda also to the identified Great Lombard areal as also part of Lombardy in its historical enlarged meaning.

Our main goal is in fact to defend, promote and hand down the ethno–cultural and environmental heritage that characterize our land, in order to be bastions of all the salient features of Great Lombard Identity and Tradition.

There isn’t a unique Italian family,  the rhetorical brothers of Italy from the Alps to Sicily, so we have the right and the duty to self-assert and to fight for the preservation of the Blood, the Soil and the Spirit of the Lombardies, also to give finally an  ethnonational size to the Italy, and to Europe too.

So, we think that  the administrative discourse is secondary e that the Great Lombardy could be divided in two subregions, a Western Great Lombard( Celtic-Ligurian and Gallic-Italic) and a Eastern Great Lombard ( Retic-Venetic with Central European influences).

However our canonical distinction is between Ethnic Lombardy and Great Lombardy in the name of that (Pan)Lombardism that is the mean reason of our association.

Anyhow this is how we would subdivide the ethnic and cultural Great Lombard areal, using the same cantonal method used also to subdivide Ethnic Lombardy: 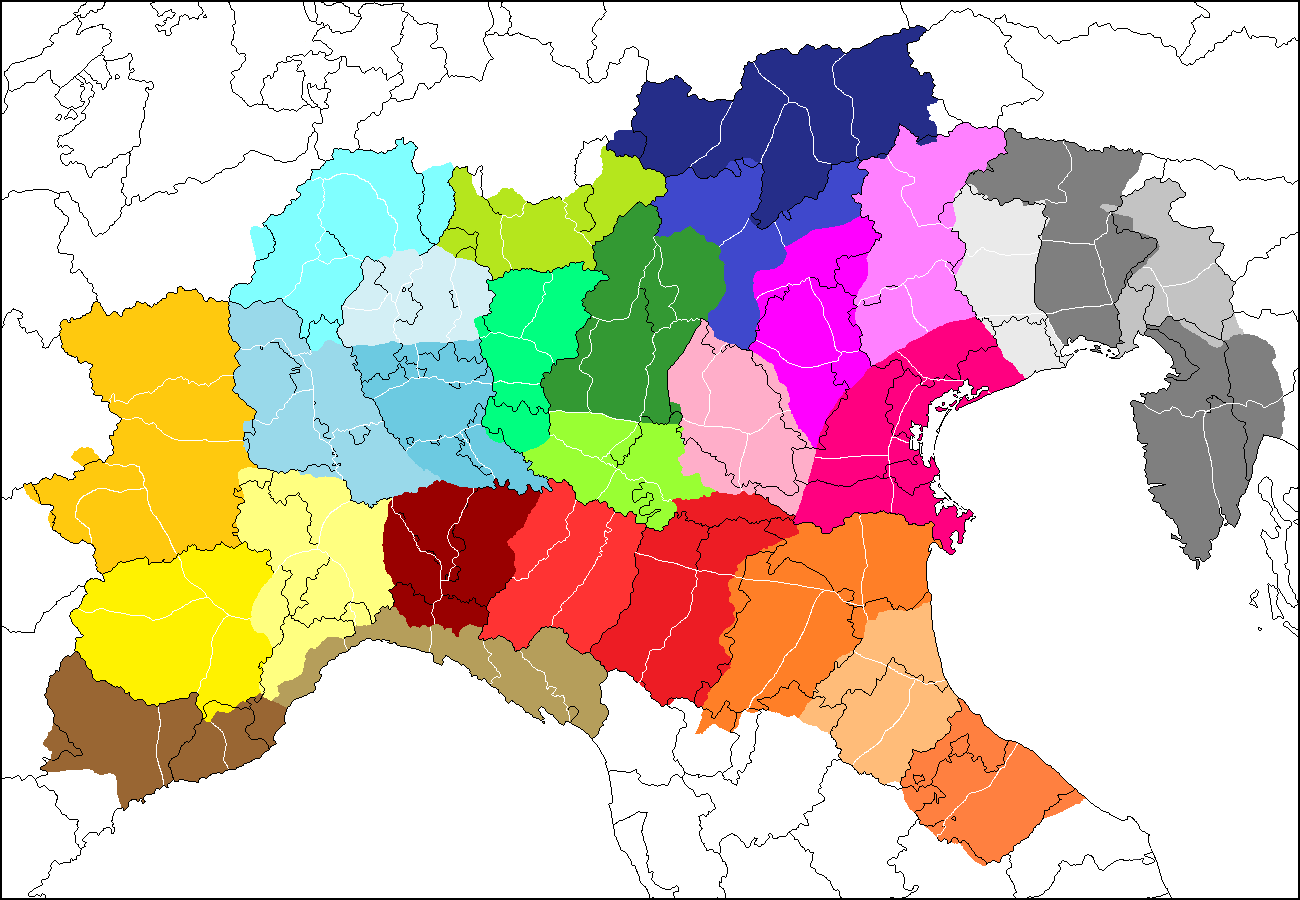 Carnia and Istria (in grey):

As you can see in the maps we tried to draw rational borders in order to combine  geographical terms (that is not an opinion) with the ethno–linguistic and cultural terms (which is sometimes very controversial), relying on the first criterion for defining the territory where it needed accurately, and we do like that when we define the borders between Etnic Lombardy and Great Lombardy, between Great Lombardy and not-Lombard territories. We did that in iclusive and exclusive sense and in fact you can see some territories today under the administration of Northern Italian regions or or at least in some ways historically Italian, have been excluded because they belong to other European geographical regions.